Every location in VisualBases is unique allocated to one of nine Kind of Location.
Push-pin colours are used in the KML-/KMZ-file available for Google Earth and KML-/KMZ-viewer. 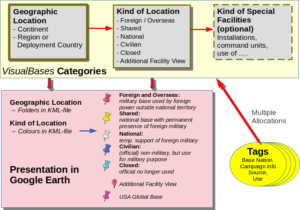 Foreign or Overseas Base

No permanent deployment of foreign forces but temporary use.
-> More info: Examples with National Bases

Bases within the USA with special facilities as part of a global network, i.e. for missile defence systems, radar tracking or drone warfare.

Former foreign/overseas military base which is officially closed and not developed for civilian use. The location has typically no cleanup from inherited burdens and could be re-activated for military use on demand.

Official not declared for military purpose, but strategically important and frequent used from military,  as any other form of military cooperation.

Additional view or (zoom in OpenStreetBrowser) for special purpose based on specific tags.
-> More info: Examples with Additional Facility Views