The following definitions are used in the spreadsheet list of David Vine.
Source: https://doi.org/10.17606/bbxc-4368

⇒ generally, means any “base site” listed by name in the Pentagon’s annual Base Structure Report (to be listed by name it must have more than 10 acres or a value of more than $10 million) and any other significant military installation outside the 50 states and DC with US military facilities and more than around 200 US military personnel (military, civilian, or contractors), as reported by at least one or more high quality government, news, or academic source; 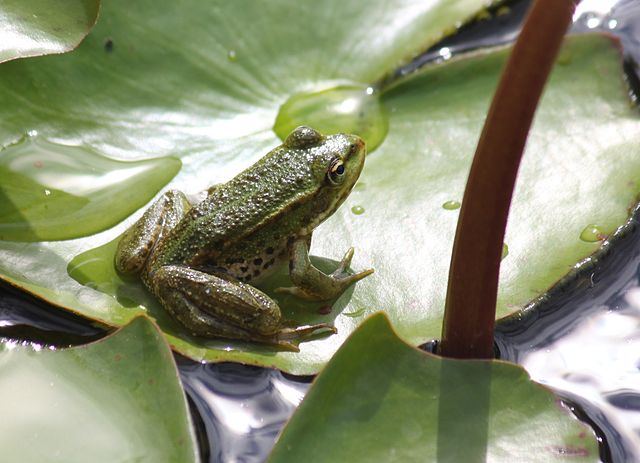 On a pond with water lilies, a frog jumps from one leaf to another, almost invisible, everywhere and nowhere at the same time without leaving a footprint (KP). Photo: Gerwin Sturm, Vienna – Source: Wikimedia

⇒ a small military installation, including a base site counted in the Pentagon’s annual Base Structure Report as an unnamed “other site,” which by the Pentagon’s definition are sites consisting of less than 10 acres or a value of less than $10 million. I also include any other cooperative security location, forward operating location/site, or other location outside the 50 states and DC with US military facilities, as reported by at least one or more high quality government, news, or academic source; and any installation that falls under the “base” definition but where it would feel intellectually dishonest or misleading to present it as such. N.B. I have thus excluded places where a cooperative security location agreement has been reported (e.g., by CRS 2011) but I have no evidence there is any US military infrastructure or personnel on the ground. A slightly more expansive definition of a lily pad would include these countries (Botswana, Namibia, Sierra Leone, Tunisia, Zambia).

⇒ no known facilities designed explicitly for US use, although US personnel may have access to and/or use facilities paid for in whole or in part with US taxpayer funds. Those listed here are far from exhaustive; most here are in Latin America. Afghanistan alone would have many, many such bases.

⇒ base closed and to which the United States may retain access in some cases.