US Definitions of Military Bases

Forward operating base (FOB)
Official definition: An airfield used to support tactical operations without establishing full support facilities. The base may be used for an extended time period. Support by a main operating base will be required to provide backup support for a forward operating base. Actually
Wikipedia EN: https://en.wikipedia.org/wiki/Forward_operating_base

Forward operating site (FOS)
Official definition: A scalable, ‘warm’ facility that can support sustained operations, but with only a small permanent presence of support or contractor personnel as opposed to a FOB or MOB. A FOS will host occasional rotational forces and many contain pre-positioned equipment.
Note: Synonym defined as Forward operating location (FOL)
Wikipedia EN: https://en.wikipedia.org/wiki/Forward_operating_site
DE: https://de.wikipedia.org/wiki/Forward_Operating_Site

Cooperative security location (CSL)
Official definition: A CSL is a host-nation facility with little or no permanent U.S. personnel presence, which may contain pre-positioned equipment and/or logistical arrangements and serve both for security cooperation activities and contingency access.
Wikipedia EN: https://en.wikipedia.org/wiki/Cooperative_security_location
DE: https://de.wikipedia.org/wiki/Cooperative_Security_Location

Geographically Separate Unit (GSU)
Official definition: A GSU is a base that is physically separate from, yet not autonomous of its “parent” base. GSU is corresponding with Further locations or listed among BSR entries in VisualBases
Wikipedia EN: https://en.wikipedia.org/wiki/Geographically_Separate_Unit
Note: This is no clear definition concerning the DoD handling within the Base Structure Report.

The US Base Structure Report

VisualBases is not a tool to deliver a total figure of all foreign and overseas military bases. But it is necessary to compare the figures which appear specific to a country with the official data. Because of the dominance of US military bases the annual US report “Base Structure Report – BSR” is of special interest. This reports presents total figures of “Installations”, which are not matching the amount of single location. The official definition is:
“Installation: A military base, camp, post, station, yard, center, homeport facility for any ship, or other activity under the jurisdiction of the Department of Defense, including leased space, that is controlled by, or primarily supports DoD’s activities. An install may consist of one or more sites.”

Extracts from a BSR you can see here: http://files.visualbases.org/pdf/BSR_Extracts_FY2018.pdf

Examples from the BSR

Note: The comparison of BSR entries with sites in the OpenStreetBrowser is confusing! 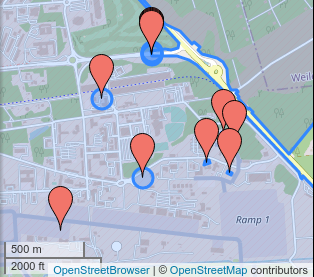 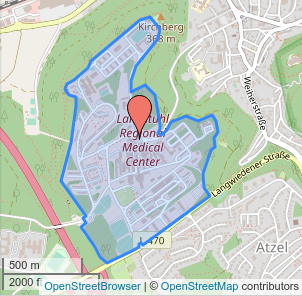 Hospital Landstuhl with zoom level 14 (same as Ramstein AB above)

Note: VisualBases follows the marked military layer in OpenStreetBrowser with Zoom level 11, besides some defined exceptions (above all “civil” airports).